Tweaking the Graphics on Level 3...

On the path towards shipping any product, a development team will iterate countless times on assets/gameplay/code/pipelines for the game with the goal of increasing quality and fun while simultaneously improving their internal processes. So it’s only natural that at a certain point we run out of iterations we can cram in, and some aspects ship with room for improvement past EA release. Today I’d like to illustrate 2 major examples of the things we always wanted to come back to, and how we are now working to improve them since our EA release.

This one is a doozie. For starters, internally we have gone through many more than 2 versions of the terrain system of our game. There was a time when everything was going to be procedural, then everything was going to have unique textures everywhere, and finally we landed on a combination of the two. We went with procedurally designed textures that get tiled and combined at runtime to give the illusion of uniqueness. Ultimately the solution we chose, while serviceable, came at the cost of video memory.

The terrain solution at launch was working, but ultimately push came to shove when we started running out of memory and file size to cram new content the game as we patched and improved it. So the lion’s share of memory use, which was still taken up by our terrain system, needed to be readdressed in order for us to improve the game further. Enter TT3.

Taking cues from megatextures along with our own Space Bullet innovations, TT3 is being built to shave down on memory use and drawcalls (# of objects displaying to the player) while also boosting texture fidelity. And heck, while we’re at it let's fix our long-standing terrain seam/gap issues and throw in support for new stuff like AO textures and glowing objects. It’s a tall order, and one that needs time in order to get it looking just right. So while it’s still several months from its debut, on the screenshot you can see the kinds of improvements to expect when its done (distant visuals are not yet working atm). 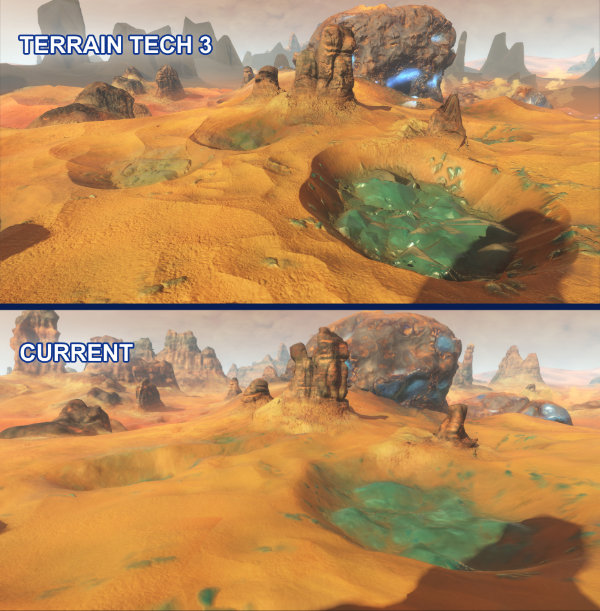 While our grinders have always had a unique look to them, one element that didn't make the EA release was armour panelling on grinders. Now you’re probably thinking we’re being nit-picky, and you’d be right! But I say to you, when 95% of the grinder’s surface area IS panelling, wouldn’t it make sense to give it the love that it deserves? We’re talkin’ bolts, little hatches, lettering/numbering, logos, markings, and of course, more rust. Also new with this update are dynamically paintable accents, which can be used by the game to give the grinders some added colour variety. Click the thumbnail below to check it out, oh and it’s coming in our next content update.

So there you have it, some deep under-the-hood work being done to elevate our visuals as we continue to work feverishly to take VOX closer to Version 1 release, one element at a time.